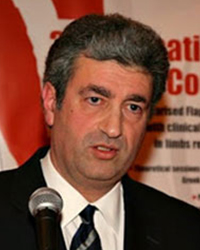 Dr Ioannis Ignatiadis absolved the Medical School of Aristoteleion University of Thessaloniki-Greece in 1987 and he obtained the title of a fully qualified Orthopedic Surgeon in 1995.

Dr Ignatiadis was nominated “Doctor in Medical Sciences”of Ioannina Univerity/Medical School in June 2016, while he past his PhD Thesis examin December 2015 with grade excellent.

Dr Ignatiadis collaborates with ATHNENS MEDICAL CENTER/PSYCHICO CLINIC since May 2013 as Head of Reconstructive limb microsurgery Dept. Dr Ignatiadis worked as Consultant Orthopedic Hand surgeon (1999-2011) at the Departments of Hand-upper limb and Microsurgery of KAT Hospital-Athens-Greece, the single such a strict specialized and called department in Greece.

During the period 1994-97 dr Ignatiadis was introduced and further trained in Hand surgery and in microsurgical techniques in:

Dr Ignatiadis has also published a lot of articles in scientific journals and written chapters in medical books.