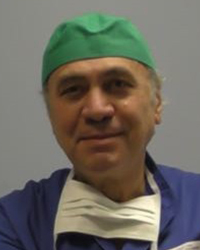 Professor Campisi graduated in Medicine and Surgery at the University School of Genoa (1973), with honours and completed specializations with honours in Vascular Surgery (Genoa, 1976), General Surgery (Genoa, 1981) and Emergency Surgery (Modena, 1986). Full Professor of General Surgery, at the University of Genoa, Italy, Professor Campisi is the Director of the Section & Research Center of Lymphatic Surgery, Lymphology, and Microsurgery at the Department of Surgery, University School of Medical Sciences and Pharmaceutics.

He is the author of more than 700 scientific publications, 9 monographs and numerous chapters in National and International textbooks. In his clinical capacity, Prof. Campisi has treated more than 5100 patients affected by lymphatic disorders, with long-term follow-up of more than 5 years to more than 20 years, using his “single-site” derivative / reconstructive lymphatic microsurgery techniques. The recent development of a lymph vessel sparing approach to liposuction has allowed the safe and effective treatment also of the advanced stages of lymphedema. In addition, Prof. Campisi is a world-renowned expert in the assessment and treatment of Chylous Disorders and associated conditions.